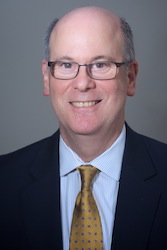 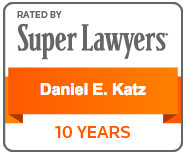 Daniel E. Katz is a Founding Partner of Rich, Intelisano & Katz, LLP. He specializes in construction law, commercial law and securities and employment arbitrations. Mr. Katz has received the highest designation (A-V) from the Martindale-Hubbell Peer Rating Review. He was recognized as a "Super Lawyer" in the field of Construction Litigation every year since 2006. Mr. Katz has been named in "Best Lawyers in America" as one of the top construction lawyers in the country. He is also a Charter Fellow in the Construction Lawyers Society of America, which is a nationwide organization of leading practitioners in the field.

Mr. Katz has extensive experience within the areas of construction, real estate and commercial litigation, as well as securities arbitrations. Prior to Rich, Intelisano & Katz, LLP, Mr. Katz was a founding partner of the boutique litigation law firm of Bauman Katz & Grill LLP. He has also served in the Commercial Litigation Division for the Corporation Counsel of the City of New York where he was responsible for numerous actions in the areas of construction, real estate, civil rights and general commercial law. As an Associate at Skadden, Arps, Slate, Meagher & Flom, Mr. Katz also handled securities and class action litigation. While he was a partner at the law firm of Ross & Cohen, Mr. Katz handled construction, surety, commercial, real estate, employment and lien law litigation. He has also handled numerous securities and employment-related arbitrations.

Mr. Katz has successfully litigated many important commercial and construction cases. In Leavitt Enterprise Inc. v. Two Fulton Square LLC, 181 A.D.3d 662, 120 N.Y.S.3d 363 (2d Dep’t 2020) the Second Department upheld a motion to dismiss a complaint and enforced an access/cooperation agreement entered into by the parties. In Minelli Construction Co., Inc. v. WDF Inc, 134 A.D.3d 508, 20 N.Y.S.3d 530 (1st Dep’t 2015), the First Department sustained Mr. Katz’s argument that a termination for convenience clause could not be challenged because it was allegedly exercised in bad faith. In Federal Insurance Co. v. County of Westchester, 921 F. Supp. 1136 (S.D.N.Y. 1996), the District Court denied the County of Westchester’s attempt to obtain a stay on appeal without posting a bond. The County’s appeal, which it eventually abandoned, related to a judgment that Mr. Katz’s client obtained, entitling it to a multi-million dollar award for its damages claim arising from the construction of a sewage treatment plant. The judgment was entered after Mr. Katz and his team conducted a ten week trial. In Diamond v. EFCO, 179 A.D. 420, 578 N.Y.S.2d 553 (1st Dep’t 1992), the First Department sustained Mr. Katz’s arguments and vacated a mechanic’s lien which was filed against a condominium because it was a “blanket lien.” In M. Viaggio v. City of New York, 114 A.D.2d 939, 495 N.Y.S.2d 680 (2d Dep’t 1985) the Second Department upheld for the first time the validity of the City of New York’s termination for convenience clause in construction contracts. Mr. Katz also had conducted the trial in the lower court. In Koch v. Consolidated Edison, 62 N.Y.2d 548, 479 N.Y.S.2d 163 (1984) the New York Court of Appeals upheld Mr. Katz’s arguments and applied offensives collateral estoppel to preclude Consolidated Edison from disputing they were the cause of a major city-wide power black out. It was one of the first instances in New York where offensive collateral estoppel was upheld on appeal. The case also sustained Mr. Katz’s arguments raising important issues regarding third party beneficiary and tort foreseeability law.